“There is always that pleasure at Seaton of pitting one’s ability against the course, as well as the surroundings, which have the real golfing atmosphere”

Although an Adelaide Golf Club was founded in June 1870 it survived but a few years.

The present Club was formed, following a meeting held at the Largs Pier Hotel on August 11 1892.

Later that year, on Saturday October 8, its first competition was held on a course prepared on the North Parklands.

In 1896 the Club moved its activities to a nine-hole course on land leased at Glenelg. This course was expanded to 18 holes in 1898.

Difficulties with the landlord at Glenelg prompted the Club to purchase land near Grange in 1904 and the Seaton links were officially opened on 30th June 1906.

The Club was granted approval to prefix the title “Royal” in 1923. Thereafter to became the Royal Adelaide Golf Club.

The land purchased at Seaton had as its nucleus, sand dunes, around which were some ribbons of grassed land but much of the property was a series of poorly drained swamps. Although poor farming land, from the very first, it was recognised as splendid golf country.

The first course skirted the sand dunes. These dunes were incorporated into the layout following the visit of Dr Alister MacKenzie in 1926.

During the last thirty years the flat peripheral holes have been progressively landscaped to give the present links its distinctive character. 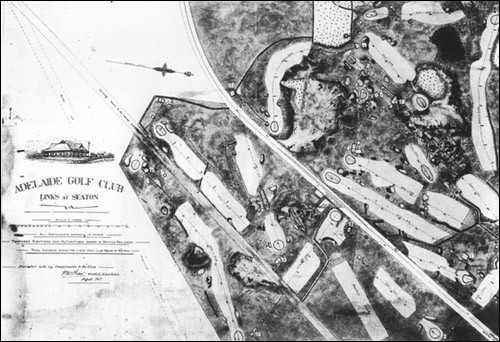 The railway line to Grange that transected the property was the means that the members, in the early years, used to come to the links. The first bungalow-style clubhouse was ready for occupation at the end of 1905 and since that time there have been countless additions and alterations to accommodate the increasing number of Members and their varying requirements.

Lady members were first admitted in 1897 shortly after the Club moved to Glenelg, and after 1907 the lady members were referred to as “Associates” Since that time several other categories of membership have been created to accommodate the financial and playing requirements of members.

The Club has always taken a leading part in the administration of Golf in Australia, being one of the foundation members of the Australian Golf Union in 1898. Members, both male and female, have been successful in interclub matches and have won several State Titles. Three of the members have won individual National Titles – Legh Winser in 1921, Miss L.M. Gordon in 1923 and Bill Ackland-Horman in 1949.